The NFU Mutual 2016 Pony Club Polocrosse Championships took place at Cholmondeley Castle in Cheshire on the 19th and 20th of August, alongside the feast of other equestrian activities that form the Pony Club Championships. Entries were up considerably on the previous year, with 108 players taking place across 6 grades of play, with ages ranging from 6 to 25 years old and players ranging in ability from complete beginners to players who have played up to international level. All of this made for a wonderful couple of days of play across two pitches, with the highlights coming on Saturday when the final few matches saw the play build through the finals of the various grades to the crescendo of the Malden Championships final between North Warwickshire and Ledbury Hunt. The only low point really was the weather, with rain showers over both days of play, which also caused the ground to cut up a bit, making life harder for the players to pick up and bounce. However, they coped with it brilliantly and showed just how skilful they were as they put on some top class displays in adverse conditions.

The youngest and less experienced of the grades was the Novice Minis, which saw sections from Ledbury, Amman Valley and a combined North Down/ United Pack section battle it out in a round robin competition over the two days of play. The end result was incredibly close, with it being decided on goal difference between the Amman Valley and the North Down/ United Pack but ultimately the Amman Valley team of Cayli Herbert, Evie Herbert and Hannah Ivey won the day from Jack and Lauren McGlennon of the North Down and Cherith Bryan of the United Pack. Ledbury’s Marley Harris, Lucinda Chinn and Freddie Ogden-Metherall were in third.

In the Brookes Minis competition, 8 sections played some fiercely competition matches in a Cup and Plate competition, with ultimately the Rockwood Harriers section of Paige Wilson, Phoebe Sykes and Harry Thomason beating Warwickshire Hunt’s Will Holland, Georgie Wasdell and Harriet Wasdell in the thrilling Cup final by 8 goals to 5. Rockwood established a lead in the first chukka and kept hold of it till the end of the match. United Pack ended third in the Cup with North Down in fourth after the United Pack beat North Down by 6 goals to 3 in the 3rd/ 4th play off.

In the Brookes Minis Plate Over Dalkeith’s Robert Ferguson, Freya McColl and Kyle Forgan were the winners after they beat  United Pack second Minis section (Charlie Evans, Niamh Morris and Emma Scuffam) in the final by 4-2 despite United Pack fighting to the very end. Area 5’s Minis team were third and Area 8’s Minis team (who all only started playing in the last year) were fourth in the Plate after they played each other in a match which ended 4-3, just in favour of Area 5.

In the Novice Juniors, 7 sections of players, most of who had been playing for less than a year took part, with there being two pools of teams and then finals between the 1st, 2nd and 3rd placed teams in each pool. The winners of the 2 pools were Over Dalkeith Stables and the United Pack. They played out a great final but Over Dalkeith always slightly had the upper hand (editor’s note: sometimes quite literally due to having taller horses and players), with Megan McColl, Lucca Puccinati and John Ferguson all linking up well to create opportunities and goals as they won by 6-2 against Sally Watney, Emily Roberts and Cerys Jones. In the 3rd/ 4th play off there was an incredibly close match between a second Over Dalkeith section and Area 8 which ended with a very narrow one goal win for Over Dalkeith. Then the 5th, 6th and 7th places went to Llangeinor,  Amman Valley and Morpeth/ Grafton, who all, like the Area 8 team, had all been playing for less than a year.

In the Stoneleigh Juniors there were 4 very good teams who played out 6 great matches over the 2 days but the North Down were undefeated with Ruben, Tilly and Archie Nield working together very well to win ball and make very effective use of it. The Ledbury Hunt section of Nat Gilder, Jack Smith and Josh Smith were in 2nd with the Rockwood Harriers in 3rd and a combined Grafton/ Hurworth team in 4th.

However, it was a different story when the more experienced sections took on each other and there were 4 fast and furious games of polocrosse, with two of them decided by just one goal. Firstly, the combined North Warwickshire/ East Cheshire section nearly pulled off a shock as they lead against the Over Dalkeith section for 2 chukkas, with Russell Smith playing particularly well. However, in the third chukkas Over Dalkeith’s Hamish Gillanders, Hannah Drew and Ruaridh Gillanders found another gear and managed to pull it back and win by one goal. The Llangeinor section, powered by their number 1 in Lauren Williams with some great support from Sophia Harpin and Tilly- May Mullens, overcame the Ledbury in their pool match by 7 goals to 6, to top their pool.

Llangeinor took on Over Dalkeith in the final. However, Over Dalkeith came out firing and lead 5-1 after the first chukka. Llangienor controlled them better in the next two chukkas but couldn’t narrow the gap with the match ending at 9-4. Over Dalkeith were crowned the Charles Mason Open champions for the first time in their history, much to their delight as they have worked their way up through the levels at the Championships over the last 5 years.  In the 3rd/ 4th Play off, North Warwickshire/ East Cheshire again played very well as Dan Drummond linked up with Lucinda Cornforth and Russell Smith to win the day against Meg Smith, Emma Williams and Freddie Leith from Ledbury. 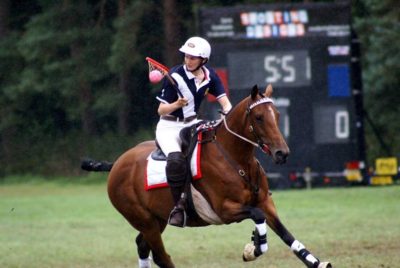 Lauren Williams and Meow go on the attack for Llangeinor

The final competition, the Malden Championships, sees teams consisting of one section of Juniors and one section of Senior players in each team. Each section plays three chukkas and the combined scores of both sections determines the result of the match. North Warwickshire were going for their 7th title in this grade, having lost the top spot to Area 17 in 2015. Sadly Area 17 couldn’t make it to the Championships to try and defend their title but the Ledbury Hunt, the Percy Hunt and Area 3 were all present to try and stop North Warwickshire. On the opening day both Ledbury Hunt and North Warwickshire each won their two matches, after some well fought matches against Area 3 and the Percy Hunt (who played off for third and fourth in a thrilling match which ended 18-16 in favour of Area 3), to set up the show piece final in the last game of the day on Saturday.

North Warwickshire and Ledbury did not disappoint as the two teams went at it hammer and tongs from the first whistle. Before the match North Warwickshire had great hopes that their junior section of Theo Cornforth, Tegan Bristow and Fin Bristow would deliver them the win but Ledbury’s Hugh Ralli, Rosie George and Josh Smith matched them goal for goal throughout the match to end level on 7 goals apiece. The North Warwickshire section did give away three free goals, with Fin being sent off for two minutes after he gave away two of them in the first and third chukkas. Luckily, while he was off the field Theo Cornforth managed to win the ball from the line up and use up most of the two minutes working his area before Josh Smith decided to simply ride away and let him score. 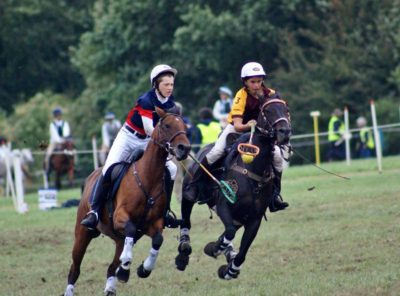 So it was left up to the senior sections to decide the match and, after three hard fought chukkas, it was the North Warwickshire’s Chris Milburn, Danny Woodward and Katie Loutisou who won against Ledbury’s Charlie Ralli, Meg Smith and Freddie Leith. North Warwickshire won their first chukka by one goal, drew the second but then came out firing in the last to stretch their 1 goal lead to a 4 goal lead, as the scoreboard read 16-12 at the final bell. In his final appearance at Pony Club Championships, as next year he will be too old, North Warwickshire’s captain Chris Milburn produced one of his best performances as he won ball, including a great interception of a Ledbury pass, and finished off his chances in front of goal. Danny and Katie shone as well, fighting for every ball as Ledbury threw everything into trying to pull back a widening gap in the last. For Ledbury, Freddie Leith pulled in some great off side pick ups throughout the match, Charlie Ralli missed nothing in front of the posts and both Charlie and Meg Smith battled hard in midfield to turn over a fair amount of ball, but ultimately they couldn’t quite do enough to deny North Warwickshire another title.

However, Ledbury know that their entire team can come back next year, one year older and hopefully one year better, while North Warwickshire will have to change at least one player. The match ended with a seemingly fitting moment, as with 10 second left on the clock Chris Milburn mopped up ball in midfield and turned and charged towards the goal, to bounce and shoot an over arm through the posts as the bell sounded, ending his Pony Club polocrosse career with his last ever goal.