Polocrosse recently conquered a new country! It has started to be played in Finland, specifically in the capital Helsinki. This might also mean that polocrosse has a new most northerly point, as Helsinki is fractionally further north that Oslo in Norway. So what has inspired polocrosse in Finland and how are the Finns taking to the sport? We sent our roving reporter and occasional polocrosse coach $@£& %€@^!& (editor’s note: It’s strange whenever we try and write his name the font changes to wingdings, very strange indeed) to find out and so we will let him take up the story (and also make an appeal for some horses)!

I alighted from the plane in Helsinki airport and collected my bag of polocrosse sticks from the baggage carousel. For some reason you always get strange looks with bags of polocrosse sticks in airports, people look at you with curiosity, wondering what could possibly be within that strangely shaped bag slung across your back. Also, if you happen to have a well known South African brand of polocrosse equipment written on your stick bag sometimes Airport Security also look at you strangely and then take you into a small room and do a very thorough search….but that’s different story!

I was met at the airport by the person responsible for bringing polocrosse to Finland, Cecilia Forsman. She played polocrosse while in New Zealand as a vet student and while there happened to meet UK players Mick and Sue Foulds. A year later she was on an exchange year in Germany and Mick put her in touch with the German Polocrosse Association so she could also play some polocrosse there. She travelled with the German team to watch them play at the World Cup in 2011 and then represented Germany in the International Challenge in France in 2012.

She returned to Finland and wanted to start the game up at home but wasn’t sure how to at first. Luckily more help was at hand from two more polocrosse nations! In 2012 Cecilia travelled to the USA for a university trip. She arranged, via the Canadian polocrosse players who she had played against in France in 2012, to stay on for a couple of extra weeks in Texas with the Liz Pohl and her family and to play more polocrosse there. That experience in the USA gave her more confidence and lots of useful tips as to how to start the game up in Finland and coach beginners. So, on her return to Finland, she approached one of the big riding schools in Helsinki and the owner agreed to let her try the sport out on their horses.

She held the first ever Finnish polocrosse training camp in January 2013 and admits that before doing so she was very nervous. “I had two groups of 6 girls on the camp, the younger ones age 10-12 on Welsh mountain ponies and the older girls age 14-17 on Estonian and Finnish horses” explained Cecilia, “The horses had had one practice before the camp, and most of the girls had never even heard about polocrosse so there were all the ingredients for a huge disaster!” 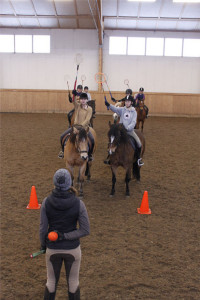 Fortunately, as she says, the girls and the horses proved her wrong, both riders and horses loved the game. They started with a small audience of disbelieving Finns on the first day watching the practice out of curiosity and ended up with around 30 people in the audience on the third day applauding every goal.

And they didn’t want to stop after one camp. “I was probably the most surprised when all 12 girls wanted to continue the practices once a week for the rest of the spring,” said Cecilia, “and then another 8 girls also signed up for the next beginners course.”

Polocrosse in Finland has only so far been played indoors, as the snow makes playing outside hard in the winter months but they are playing in a large indoor school, with insulated walls to keep the cold weather at bay, so have been able to play some practice chukkas as well as work on skills and the players are getting better with every practice session. They practice most Sundays for about three hours and they held their first ever tournament in March, which was a great success.

Both the players and the horses seem to be taking to the game very well and they hope to carry on growing the sport and want to get outside onto grass, now that the summer is approaching, to play on a full sized pitch. They also have plans to get more riding schools involved.

“In a month Finland has gone from having only one polocrosse player to having 21 players,” said Cecilia, “What’s going to happen in the future we don’t know, but we are hoping to get polocrosse to spread to the other riding schools in the area, and to Estonia because the Estonian horses seems to be just perfect for the game. They might not be as fast as the thoroughbreds, but they are agile, small, sturdy and nice tempered, and they love the game. We are taking small steps but maybe someday I will be able to ride and represent my own country in the International Challenge!” 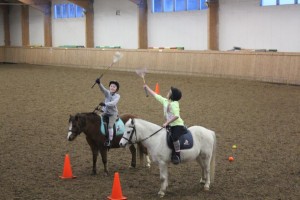 And well she might, because in just three months, and only practising once a week, the Finns have done superbly, they have mastered many of the basics of the sport and are working really hard at getting better and better. A lot of the credit must go to Cecilia who has acted as organiser and coach for them and has got them to where they are today.

Travelling to coach polocrosse in Finland was one of those great moments which reminded me why I love the sport of polocrosse (editor’s note: and of course this had absolutely nothing to do with the fact that you got to spend the day with lots of Finnish girls…). It was an opportunity to relive those moments when you start learning to play, you are learning all the time and you get such a thrill out of mastering a new skill. It was a chance to see polocrosse in all its purity, no politics, no arguments, just the simple joy of the sport itself and the desire of new players to get better and grow the sport in their country, something which sadly often disappears when the sport becomes a bit bigger and people for some reason stop trying to share and grow the sport and instead get drawn into political wrangling and positioning.

So it was with some sadness that I repacked my stick bag and headed back to Helsinki airport. I think polocrosse could have a big future in Finland, I hope so anyway and hopefully I can go back and report/ coach some more. Though the way those airport security men chased me on the way back I’m not sure they will be so keen on me returning……

An appeal for horses!

So we are ending this article with an appeal! Some of the Finnish players are really keen to come over and play in E grade at the Polocrosse Extreme Cup on the 22nd and 23rd of June but obviously they will need to borrow or hire horses. So this is an appeal to anyone who might be able to either lend or hire at an reasonable price a horse for them to use in E grade.

They really want to come over and take part in a proper tournament, obviously their flights and travel will cost them a fair bit and so I said I would try and find them a few horses to use either for free or for a low hire fee. Obviously to play E grade they don’t need amazing horses, just ones that are safe and will give them a good introduction to the sport.

So if you think you can help please can you get in touch with Iain Heaton on polocrosse@hotmail.co.uk. It will mean a lot to them to be able to come over and play and it would be another great step forwards in developing polocrosse in Europe so please if you can help do!

Also I know June seems a long way away right now but they have to book flights and make plans to come over so obviously a speedy response is much appreciated as well!

Comments - No Responses to “Polocrosse’s New Most Northerly Point? Our Man Heads to Helsinki!”