The Family Grills ruled supreme in the Southern 50 Shootout as their Berragoon team picked up the $10,000 cheque for first place and a host of individual prizes. They were unbeaten throughout the tournament and overcame Bombers Australia in a very hard fought final to claim the top spot. The lead changed hands a number of times in the Final and Bombers Australia lead by two goals going into the last chukka but Berragoon pulled back level and then grabbed a couple more goals to secure the win.

The two teams actually meet in the opening group match as well and on that occasion Berragoon won fairly comfortably by 25 goals to 11. After that both teams won their remaining group matches to go through to the semi finals where Berragoon faced the Sutton Sixers and Bombers Australia faced Wellington Livestock, who had qualified as the top two teams in the other group. 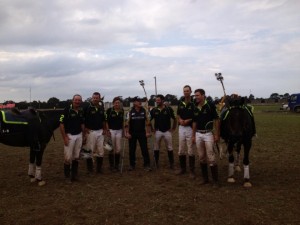 Comments - No Responses to “Berragoon Claim the Southern 50 Shootout”