Did you miss us? Well you don’t have to anymore! The Polocrosse Extreme team has returned from its three month trip round Asia and is now getting ready for an action-packed 2012. We did not waste our time away, many lucky people around Asia learnt about the wonders of polocrosse and we tried to see if we could start any polocrosse out there but alas horses are in short supply. However, as you can see in the photos below we did try and experiment with a couple of different mounts.

So what is coming in 2012? Well, on the home front there will be the full UK season, for which the draft tournament schedule is now out, and rumours of an outbound tour to South Africa for a UK team. Elsewhere there is the biggest polocrosse National Championships in the world, the Australian National Championships, at Morgan Park in Queensland, the Zim Open is rumoured to be back on this year and also France will host an International Challenge for the first time. The event, which is due to be held in Northern France in late July, is rumoured to be featuring teams from France, Holland, Norway, Germany, Canada and UAE and it marks another step forwards for polocrosse in Europe and indeed for the world as whole.

Also as well as the tournament action we will be searching for any other polocrosse news. For example, we have heard that this year there will be a permanent UKPA club based at Onley Grounds, the 2011 World Cup site. The new club is being headed by Phil Baker, the owner of Onley Grounds, and UKPA stalwart Simon Paynter. The facilities at Onley will undoubtedly make them the envy of many clubs, featuring as they do enough room for about 8 polocrosse pitches and 1 indoor and 1 outdoor polo arenas for the winter months.

We will do our best to bring you all the news and action from around the world in the next 12 months. We hope you enjoy reading about it!

Can’t get a horse in Vietnam? Try a buffalo! Oh and the umbrella is a useful addition if you get weather like at the World Cup! 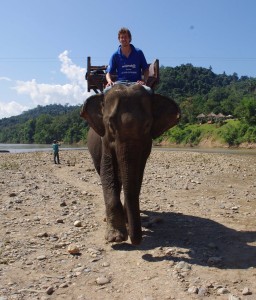 A member of our team tries out a new playing “horse” while in Laos. Unfortunately a lack of speed in the turns meant he didn’t buy it but its ride offs were amazing!

Comments - No Responses to “And We’re Back!”