New South Wales were involved in both Masters finals on day 4 of the Australian National Championships at Ballarat but only managed to claim one title. They won the Masters Men against Western Australia, all be it after a poor start, but lost to Queensland in the Masters Mixed final.

In the Masters Mixed NSW got off to a great start with good play from Jane Melbourne but Queensland had built themselves a lead by the end of the second chukka with good play from their number 1s in Paul Johnson and Linda Johnson. In the third chukka Queensland were forced into a mid chukka substitution when their number 3 Lauren Tindall parted company with her horse (this was the first of three falls in the finals, Ian Broad and Doug Webb both parted company with their mounts during the Masters Men final). On came Robyn Cooper to fill the spot and it turned out to be an inspired substitution as Copper played brilliantly for the remainder for the game, winning ball in midfield and linking up well with Lisa Johnson. NSW didn’t help themselves by giving away a few free goals, mainly from Bruce Greenslade in the men’s section. Though most of the players on the pitch were over 50 there is still the fight and passion in them and at points throughout both finals they dished out some serious punishment to each other with head hits a particular feature. Towards the end of the Masters Mixed Final, NSW put Arch Anderson up front to try and pull back the deficit but even his experience and skill couldn’t narrow the gap and Queensland were worthy winners by 20 goals to 17, gaining revenge for the defeat NSW inflicted on them in the group stages.

In the Masters Men final NSW started badly, with Ross Turnbull giving away a number of free and cheap goals at number 3 and other players making mistakes. Queensland, on the other hand, all started well and played well throughout. However, gradually NSW worked their way into the game and pulled back the deficit. At the end of chukka 6, Doug Webb, who had an inconsistent game but improved as it went on, levelled up the scores at 14 all and then promptly missed a chance to put NSW ahead for the first time. Michael Thurkle didn’t miss his chance at the other end and Queensland lead 15-14 at the start of the 7th.

Then, to the relief of the New South Wales fans, Ross Turnbull found his top form. He grabbed the first four balls in the chukkas and delivered them to his number one in Michael Gorman who took his chances well. At the end of the chukka NSW had built themselves a four goal cushion and out came the final section to protect it. WA fought to the last but were matched pretty much goal for goal and NSW claimed their first title of the Championships by 22 goals to 19.. 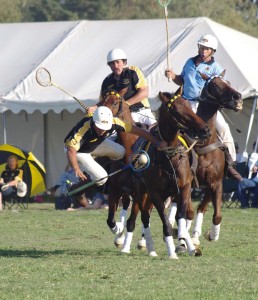 Ian Broad parts company with his horse, and yes that is a Western Australia themed Umbrella in the background. Those WA fans…

As well as the two Masters finals there were a a total of 17 other games played and there were some classic contests. First up NSW Under 24 Women faced WA. Both teams had won their opening rounds and now the winner of this contest was pretty much guaranteed a place in the final. NSW emerged victorious as they proved too strong for WA, with April Legget scoring freely and Ashlee Anderson and Lucy Grills winning a lot of ball. WA fought back late on, with Hayley Smythe in particular producing a strong last chukka but it was in vain as WA went down 20 goals to 10.

WA Senior Women faced Queensland and continued the winning form they showed against Victoria to progress to the final against NSW. Queensland have now lost 2 from 2 and they can’t reach the final. The same is true for Victoria who went down to NSW by 19-9. NSW face WA tomorrow in the group stages and then, regardless of who wins, they will face each other again in the final on Sunday. Both teams will use tomorrow to sound out each other tactics and see where they can gain an advantage.

Queensland managed to put an end to NSW unbeaten run today, not only did they beat them in the Masters Mixed final, but earlier in the day their Under 21 men defeated NSW. Queensland started better and lead throughout. Blake Wells in at one of the number 3 spots for Queensland looked particularly impressive, carrying the ball confidently for his number 1 Brad Hall and also causing NSW problems in attack, holding up their number 1’s and stopping them scoring quick goals, which NSW badly needed towards the end of the match. Both teams changed their sections around in the last chukka, to try out new ideas as they are likely to face each other again in the final on Sunday, but the Queensland changes worked better and they ran in a few extra goals to win 19-12.

Victoria’s Senior men’s side faced WA, knowing that they really had to win to stand any chance of reaching the final. They started well and some great play from Ricky Smith in particular keeping them level with WA. However then WA started to draw slightly ahead, with great player from Jared Martin and Ben Thomas in the number 3 shirts winning them a lot of ball. With Rob Sibley and Adian Thurkle up front they didn’t miss their chances either and though Victoria fought to the end and produced some great polocrosse they just couldn’t quite match WA, who eventually won 27-19 and now seem a good bet to make the final on Sunday.

Elsewhere in the Senior Men’s competition Queensland took on NSW and early on it looked like the solid win they had recorded over SA the day before had given them a lot of confidence. They lead at the start with Michael Dillon firing in the goals and Russel Owen looking good in the number 3 spot. However, NSW fought back to level it up at 7 early on in the 3rd. Then there was an extended when a run away horse from the Under 21 Men match between Victoria and WA (which was happening on a neighbouring pitch) flattened a spectator and dumped its rider Tyson Armstrong squarely in the middle of the pitch. Ambulances arrived and took away both of them and play was held up for about half an hour while this occurred. The break seemed to favour NSW more and afterwards Will Weston and Abbot Grills linked up well to push NSW ahead. Lance Anderson and Chris Anderson keep the lead going in the next chukka (though Lance Anderson also manged to fall off his horse during the match). The final score was 21-16 to NSW and means they are also very likely to make the final on Sunday.

In the Senior Mixed WA again produced a thriller of a match (after their over time winner against Victoria yesterday) against NSW. NSW started the better and lead with good play Lyric Anderson for the ladies and Jeremy Thurkle for the men. However, WA fought back with Chris Dunlop doing a great job in defence against Bernie Smith in the fourth chukka and Billy-Joe Thomas pushing in the goals at the other end. The WA ladies put Tracey Jarrett up to number 1 and she linked up well with Sarah Marriot, who was very strong in defence throughout, to give WA a small lead going into the last. The men came out and Adrian Tiver added a couple more goals to give them a four goal lead. However, WA do seem to have problems defending leads in the last chukka (they squandered a lead late on against Victoria to set up the over time) and back came NSW with three quick goals to make the difference just one. With time ticking down on the clock NSW got the ball again and made it to the area. Chris Dunlop held up Jeremy Thurkle for a few seconds out in the corner and it proved just enough as before he could get to the posts and pull the trigger the hooter sounded and again the Senior Mixed division had produced a 1 goal win, this time by 16 goals to 15.

Elsewhere in the Senior Mixed Victoria finally scored their first win after their two 1 goal defeats to WA and Queensland. They beat Tasmania by 30 goals to 6. Tasmania fought hard but good play from Islay Young and Jamie Dowsley for the Victorian men and Kirsty Cooper and Vicki Semmens for the ladies did the damage and Tasmania remain winless for the moment. Tomorrow sees them take on South Australia in the Senior Mixed, a game they have said that they are targeting for a win.

South Australia got another win today as their Junior mixed team defeated the WA team 12-10 and WA also suffered a 16-12 defeat in the Junior Open to the strong Northern Territory team who still have a good chance of making the final, despite their defeat to NSW yesterday. Northern territory also won their Under 21 mixed match against Victoria by 18-14 to keep their hopes of the final alive.

SA suffered two defeats today, one against NSW by 18-12 in the Under 21 Mixed division and one in the Senior mixed to Queensland by 25-8. Victoria’s Under 24 Women won a hard fought victory against Queensland by 16 goals to 15 to keep their hopes of a final place alive. However apart from that win and the win in Senior Mixed against Tasmania Victoria had a disappointing day, as well as the defeats in the Senor Men and Senior Women they narrowly went down 18 to 16 against WA in the Under 21 men and by 21 to 6 to Queensland in the Junior Mixed.