The sixth day of the Nutragrow Australian National Championships featured 10 matches but only 6 could have any effect on the who will emerge as champions of the various grades. There were three finals and three matches to decide who will feature in finals tomorrow. New South Wales featured in all three finals but ultimately could only win 2 as Queensland defeated them in the Under 21 Men final.

The first of the finals was the Junior Mixed which saw NSW take on Queensland and this time the result went firmly NSW’s way. They lead from the start and never looked like letting Queensland back into the match with great play from all the members of the team. Even when they took their two normal number 1s. Gracie Halsted and Brandon Parkinson, off the field in the last 2 chukkas and replaced them with Ellie Field and Lachlan Howes, it seemed to make little difference and the goals continued to flow. They eventually won 31-14 and few people could say they did not deserve it

Next up the NSW Under 24 Women took on Victoria but the result was very similar. Again NSW took the lead from the start and Victoria could not find an answer. Victoria did have some bad luck in the match but even without that it seems likely that NSW would have triumphed. Victoria’s bad luck started in the 3rd chukka when Elli Vavlitis, who had just been sent on as a substitute, fell from her horse and had to be replaced by Sarah Steff, who she had been subbed on for. About 2 minutes later Steff herself fell and though she remounted after a break and carried on she did seem hurt by it. Then in the fourth chukka Samantha Allen’s saddle slipped and she also hit the deck. For the third time the paramedics came flying out on to the pitch but Samantha picked herself up and carried on. Sarah Steff was rested for the fifth chukka but came back as a number 2 in the 6th. However she didn’t look right and after 2 minutes had to retire and was replaced by Phillipa Astbury. After the chukka ended the news came Steff would not carry on and that she had been replaced in the team by Annie Forbes from the Victoria Under 21 Mixed team.

Annie made her first appearance in the 7th chukka but the result was the same, NSW winning the chukka 4-2. Victoria also made changes in the last chukka, switching Sam Allen from number 3 to number 1 and her sister Kelly (who had a good game when she had the ball and never gave up fighting and chasing for the whole match) the other way. This seemed to have a good effect too and they won the final chukka 3-1. The end score of 30-12 was perhaps ultimately a little harsh on Victoria, particularly seeing how hard they fought but little could be taken away from NSW who were all on brilliant form. Both Ashlee and Skye Anderson were devasting at winning ball as number 3s and April Leggett was the pick of the number 1s. Also Lucy Grills, who is only 17, put in another brilliant performance, first at number 2 and then at number 3.

In the Under 21 Men’s final, however, Queensland did take everything away from their NSW counterparts. In this match started the brighter but only just, taking the first chukka 4-3. It was a similar story throughout, no side was able to put in a huge chukka and Queensland gradually edged away to be leading 19-4 going into the last. Seeing the last chukka featured the very solid Blake Wells in defence, who had been stopping NSW scoring quick goals all game it seemed unlikely that NSW would pull it back anyway but it certainly did not help that their number 3, Jack Halsted (who had had a reasonably good game up until this point), slightly lost it and managed to give away 5 free goals in the chukka. First he hit his own horse with a racquet, which the umpires penalised straight away with a goal, and then managed to give away another four by a combination of wild swings and dangerous riding. Queensland also took the opportunity to add a couple of normal goals and the end score was 26-14 to Queensland.

Throughout the match there were some real moments of skill and brilliance but it was perhaps a game which belonged more to the number 3s than the number 1s. For Queensland Blake Wells was outstanding in defence and Beau Moore was a wonderful attacking 3. For NSW Tommy Trisley had a very solid game in the number 3 spot and though NSW as a whole committed a few errors he was pretty flawless. NSW could never put the consistent pressure on Queensland in midfield that they received themselves and this meant that Queensland won more turnover ball and made NSW slower at scoring and once they were behind it was always going to be very hard to come back.

Before all the excitement of the finals there were 3 matches played which would effect the finals tomorrow. Firstly, NSW took on Northern Territory in the Under 21 Mixed to decide who would make the final. The answer was fairly decisively NSW as the light blues won 21-8.

The Territory, however, did have a much better day in the Junior Open where they took on Queensland to decide who would make the final. Queensland lead 6-5 going into the third but Jack Cooper (Number 1) and Jake Burgdorf (Number 3) again linked up brilliantly to produce a big chukka to put the Territory 10-6 up. However, back came Queensland with Matt Davison at 3 and Aaron Sillitoe at number 1 producing some great polocrosse and Queensland crept ahead again. In the fifth Burgdorf and Cooper again got the better of Queensland but this time it was closer and the Territory only lead by 2 goals going into the last. The Territory fans must have been praying for a miracle as this Queensland section with Davison and Sillitoe seemed very capable of overhauling that difference. Whatever they said to their Northern gods did the trick as they got a break early on in the chukka and extended the lead and then Braydon Beck (1), Rosie Stewart-Boon (2) and John Piening (3) produced a wonderfully composed performance to not only hold on but extend the lead to eventually win 17-12.

In the final decider match of the day, Queensland took on Tasmania in the Senior Mixed with the knowledge that if they won by enough they would go through to the final instead of Western Australia. That was enough of an incentive for them to pump the goals through and they ran out winners 26-4 and claimed their spot in the final.

In the other 6 matches of the day, Victoria beat South Australia in the Senior mixed by 25 goals to 7, with Islay Young producing a good performance despite being heavily strapped up due to a groin injury (which he has played with through the championships, though we aren’t entirely sure how he got it in the first place). SA also went down to Queensland in the Under 21 Mixed.

(and yes, our paparazzi did have to spend a whole chukka taking close ups of Islay to get this photo. And we have just realised that is a Highlanders’ long sleeved undershirt he is wearing. Yesterday he was walking round in a UK Under 21’s coat! He seems to have taken all of the UK’s clothes with him when he left Kent! He is a loveable rogue though so we will let him off!)

Victoria had a good day all round as they also beat Northern Territory in the Senior Men, their first win of the grade and leaving Northern Territory winless, and also defeated Tasmania in the Under 21 Mixed. Their only disappointment came in the Junior Open where NSW beat them convincingly, a match which perhaps was most notable for the fact that one of the NSW players rode out at the start carrying a Bombers flag, perhaps a sign that the battle of the stick manufacturers in hotting up. 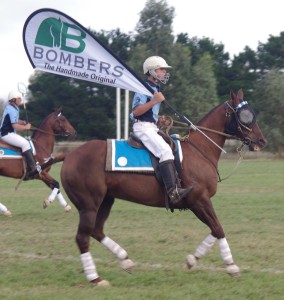