The UK development squad fly out to America at the end of this week to face the USA in a series of two test matches. The USA requested that the UK send a squad in order to help them with the development of their team in the run up to the next World Cup. They requested strong competition but not the UK’s best. With this in mind the UK have selected a squad of entirely young, uncapped open players.

The four men in the squad are all former under 21s; Alex Bull, Danny Duhig, Jono Keen and James Davidson. The four ladies are Beth Peaker, Charlotte Pykett, Caroline Kelly and Vicky Metcalfe. The reserve is Rob Jenkinson. The UK squad has been hit with injuries and withdrawals; originally Jenny Palmer and Kerry Bean were amongst the ladies but Jenny was forced to withdraw due to injury after a very bad fall at Arden tournament and Kerry Bean also had to withdraw, so Caroline and Vicky were bought into replace them.

The team is being managed by Richard Chapple and coached by UK Open Squad star, Guy Robertson. Despite the changes to the squad that have been forced upon them Richard Chapple is optimistic that they will be successful, “We have a strong team and with my management and Guy’s coaching what the hell can go wrong?” he said earlier this week.

Certainly the men are a very strong side, all are knocking on the door of contention for the UK open squad. The ladies could perhaps find it tougher; Beth Peaker was just selected to be part of the UK open squad for the Quadrangular tournament in Australia next year and both she and Charlotte Pyklett are former Under 21s and have played alot of A grade in the UK and in New Zealand. It is a bit of a step up for Vicky and Caroline but they are both experienced players and will undoubtably learn a great deal from the tour, which is the point of this development squad. The USA ladies were also not particularly strong at the World Cup in 2007; they were comfortably beaten by a full UK ladies section by 12 goals to 5. 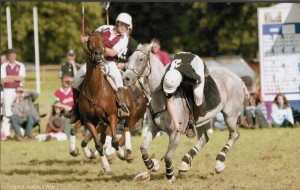 Jono Keen demonstrates how to do an offside/ onside pick up – can the USA cope with magic skills like that?

The USA have also selected a fairly unknown squad. The only three survivors from their World Cup campaign are Robbie “The Commodore” Shuttles, Ryan Strider and Erin Smoyer (who is the ladies reserve). Ryan Murphy, who played at the World Cup, is the coach for the team. The other male players are Derek Rummel, Rahul Desal and Quentin Jamenson (mens reserve). The ladies are Dori Wiseman, Taylor Smith, Rachael Gayler and Stef Shuttles.

It is not known what formations the USA will favour though Robbie Shuttles is normally their number 1 for the men and Ryan Strider is usually found at number 3 or 2.

The UK men will probably favour Danny Duhig or Alex Bull at 1 and Jono Keen or James Davidson at 3. James is also a very good number one and all the players can play number 2 so it would be no surprise if Guy switched his players around a lot during the tests. Guy will probably play Beth Peaker at number 1 for the ladies, though both Charlotte Pykett and Vicky Metcalfe have played number 1 a lot. Caroline Kelly is a very experienced 3, though all the girls have played here quite a bit over the course of their playing careers so it remains to be seen exactly how Guy will choose to play them

Comments - No Responses to “UK Get Ready for USA Challenge”