The Irish National Polocrosse Finals 2008 were held on the last weekend in August at Davern Equestrian Centre, Clonmel and were proudly hosted by the Tipperary Polocrosse Club. There were 147 players representing their clubs from Carrickmines, Tipperary, Limerick, Birr, Horetown, Waterford, and the newest club of all Cork.

Players descended on Clonmel on Friday evening as the two-day competition was starting on the three pitches at 8:30am to try to accommodate the massive entry. The tournament had seven grades: A, B, C, D, Junior A, Junior B, and Primary Juniors.

The competition was fast and furious in all grades, some were playing Round Robin while others were resulting in Finals on Sunday. All the higher grades were played by a team of six, divided into two sections of three who play alternate chukkas of six minutes except for the juniors who played as teams of three. 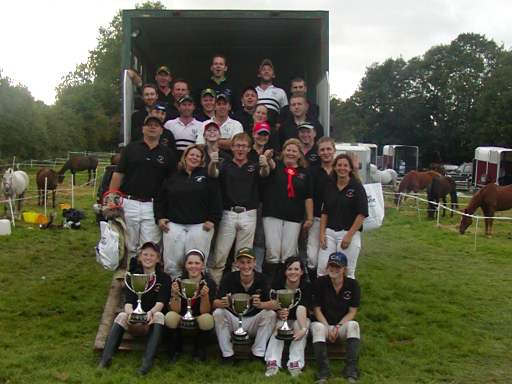 The victorious Horetown club pose with much silverware!

The Junior A Final was contested between Horetown’s Conor Doyle, Dervla Murphy & Jess Power, and Carrickmines’ Joanne Lavery, Sarah Brandon, and Amanda Courtney. Horetown were dominant from the first throw in and emerged champions with a high scoring margin.

The Junior B Final was between Horetown’s Emily McDonagh, Liam Murphy & Elle Byrne and Carrickmines’ Emily Loughran, Owen O’Malley & Jennifer Whelan. Both teams were level at 2 all at the end of the first chukka but when Horetown produced some wonderful pick-ups, great passes and impressive goals they won with a score line of 8 goals to 2.

The B Grade was also ran as a round robin competition. Carrickmines team of Niall O’Brien, Tom O’Malley, Rhona O’Dwyer, David Deak, Diane Courtney and David Smyth were victorious.

The newcomers from Cork, Michael Murphy, Joanne O’Flynn and Richard Crockett took the D Grade title by the narrowest of margins over Tipperary. All players and spectators alike were delighted to see this new club progress so well.

The Primary Juniors were mixed from all clubs and played as a round robin competition. It was a wonderful sight to see so many young players showing such determination and contesting this competition.

Sunday afternoon at 4pm was the climax of a wonderful weekend with the A grade final. It was contested by Horetown and Carrickmines and was a wonderful exhibition of fitness, discipline, quick reaction, courage and wonderful horsemanship.

In the first chukka Horetown’s Aidan McDonagh, Seamus McDonagh and BJ Byrne took the lead over Carrickmines’ James Smyth, Julian Chambers and Paul O’Leary. In the second chukka, Horetown’s Padraig Barron, Richie Nolan and Aaron Power stretched the lead even further over Carrickmines’ Seb Chambers, Daniel McCarthy and Avis Watton. Horetown managed to maintain this lead all the way through the six chukkas despite a gallant effort from Carrickmines.