It has come to our attention that on the Sunday night at Nationals, soon after he was awarded the Man of The Year Prize, Jason Burbidge was careless enough to lose the official certificate. We know this because we have it! At first we weren’t convinced it was the real thing so we spoke to some experts, including the man who originally laminated the certificates, and they all confirmed that it was the real deal! 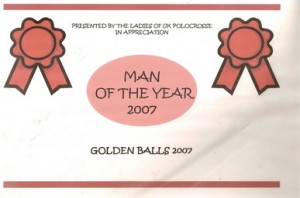 It is not known why Jason discarded it, maybe he decided it wasn’t worth keeping (unlikely we feel), maybe he had had a bit too much to drink, maybe he was mugged and the certificate was lost in the scuffle.

Regardless of the reason the Man of the Year organisers have taken a hard line and had detailed discussions about what should be done with the certificate now. After a lot of thought they decided to give it to us and that we should decide what should happen with it. At first we thought about awarding it to one of the team here but we decided that might be frowned upon, so instead we are giving you the right to choose its fate! That’s right, we have built a poll!

Comments - No Responses to “Man of the Year Shock!”