The Man of the Year contest was again a huge success this year and seemed to involved even more nudity than in 2006. In fact, in nearly every single category the contestants found it necessary to take their clothes off.

Todd Weston beat off competition from his countryman, Chris Robinson and two Zimbabweans, Bradley Clarke and Andy Baker (though Andy did kind of rule himself out when he fled the stage during the compulsory shirt stripping stage – he is a shy boy). 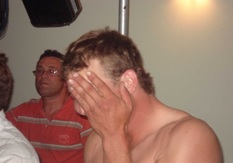 Jason Burbidge failed to defend his title as it was taken off him by the New Zealand silver fox, Shane Hill. Jason’s Arden clubmate, Simon Paynter and Chris Illingworth both tried to stop Shane but he was not to be denied the title and will now cart it back to New Zealand for the winter!

This category saw a victory for the home club as Martin Verhagen was rewarded for all his hard work this year. It would have been hard to award it to anyone else, after all the man organised a great deal of Nationals, played himself and still found time to support and help his children! 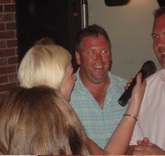 Goal Judge of the Year

There was only really going to be one winner of this category, James Davidson. The boy has for years been the most flashy goal judge around and he delighted his fans with his signature forward roll ending with racquet aloft to signal a goal! Polo-X-treme editor Iain Heaton did his best but frankly he was a long way short of James.

Iain Heaton failed to lift a Man of the Year award; looking like this we can’t understand why not!

Party Animal of the Year

This popular and hard fought category ended in a victory for the big Zimbabwean party boy, Greg ‘The Sarge’ Sargeant! All the contestants had to perform a lap dance for Sue Brookes (lucky her) and Tom Wigglesworth got us off to a fine start by stripping to his underwear. Rob Jenks decided more clothes were necessary but keep the B grade shield strapped to his arm throughout. Then the big Sarge stepped up and showed them how it was done. He started his dance reclined on the bar and shimmered his way through the crowd before treating them to the dance of a lifetime.

Wiggs, Jenks and Sarge: Their mothers would be proud of them…

Check out the video of Tom Wigglesworth doing what he does best!

The Golden Girth this year was taken by the Arden boy Chris Chennells. Ash Biggin got things started but only measured a disappointing 31 inches. Chris measured 47 inches and no one else could get close to that.

Chris get measured and is found not wanting

Sexiest Thing in the Saddle

As is traditional for this category the contestants compete by riding pre-chosen mounts and showing that they do truly look great in the saddle. Obviously we can’t allow horses in the clubhouse so a substitutes has to be used and the substitutes are…girls. After a fast and furious ride off Tom Beney was crowned the champion. Check out the video here (no girls were harmed during the making of this production, in fact they seemed to enjoy it!) 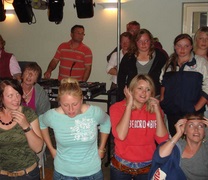 A selection of fine mounts prepare for the ride off!

Man of the Year

The Man of the Year title for 2007 went to the UK captain and Arden hero Jason Burbidge. He beat Guy Robertson, Simon Shearing, Jason Webb and Greg Sargeant to this honour. For some reason again everyone had to take their shirts off and after some debate the judges decided that Jason was the man!

Jason, Simon and Greg start the muscle flexing for Man of the Year!