The Highlanders have begun their off season spending spree early. Last year they signed up the Aussie wizard Brian Davidge and Tom ‘Big Red’ Simkin. This year they have started by snatching ‘Uncle’ Pete Wherret from Arden and it looks like they aren’t going to stop there!

The Highlanders announced this latest signing at their own tournament and paraded Pete in his new colours. Uncle Pete is, frankly, a polocrosse legend; he used to play with the All Blacks and when they folded he moved to Arden. He has in his time played in every grade, though nowadays he is usually found in the B or C grades. What role and team Highlanders intend to use him in is unclear and it is also unclear whether he will end this season with Arden or whether he will play for the Highlanders at Nationals. If he has changed clubs them he will be subject to a two week suspension before he can play again; this rule was brought in a few years ago to stop clubs grabbing good players shortly before the Nationals.

Highlanders Chairman and Club Captain Guy Robertson said of new signing ‘We have been on the lookout for a replacement for Rick Murray ever since the beginning of the season and have not been able to find anyone suitable, I think in Uncle Pete we have found someone to do this’.

Uncle Pete was welcomed into the club by the open arms of James ‘Tsunami’ Robertson who gladly helped Pete drink his signing on fee – a bottle of Jack Daniels. How much this deal is worth in total is unclear but it is speculated that it will end up being in double figures. In addition to Uncle Pete, Highlanders have also been linked with Arden starlets Danny Duhig and Alex Bull, who spotted in talks with Robertson at last weekend’s tournament. Robertson has refused to comment either way as to whether these rumours carry any weight but did say that Uncle Pete would not be the last big name signing making his way up the A1.

However, if Highlanders do sign all these players it could cause problems, for a start Arden will be severely weakened and also it means that Highlanders could have too many players to put in their top teams. This may lead to angry players who have been left out and are denied their chance of glory. After all, you only have to look at the top players who have come and gone from Chelsea over the last couple of years to get an idea of what could happen. 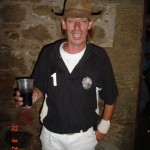 Comments - No Responses to “Highlanders Open Their Chequebook”