Greg Sargeant has responded to the challenge of Becks by saying that he will not only deal with him but with the entire Highlanders team. Greg told us that he doesn’t mind which Highlander he starts with but if Ed wants to go first he is more than welcome!

He says that he has nothing against Becks in particular but when he pulled on a Highlander’s shirt he sealed his fate. Greg’s exact words were “I see Ed simply as a small speedbump on the road to immortality!”

With Greg now intent on satisfaction one feels that the result is a forgone conclusion, after all the difference in height and bicep circumference is fairly pronounced! Perhaps it would have been better for Ed to target a slightly less muscular Zimbabwean, such as Hamish Michael. The only thing left for Highlander’s fans to do now is to be pray that Ed turns out to be a Mighty Duck! 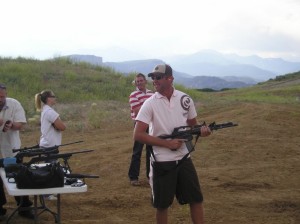 Greg senses the approach of the Highlanders

Comments - No Responses to “Greg Guns For Highlanders”