With just a day to go before the Under 21 squad fly out to Oz to face their Australian counterparts, Dan Duhig has damaged his thumb. It occurred during the Saturday night party at Liscombe tournament. He had to be taken to hopsital and reappeared later in the day with it heavily strapped. The entire extent of the damage is not known but many people said it was broken. It is rumoured that the UKPA doctors have said he shouldn’t play for seven weeks to give it time to completely heal. 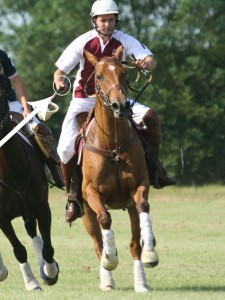 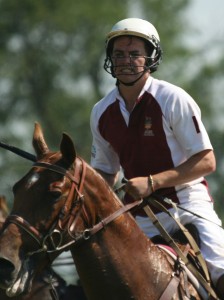 Dan during a match on Saturday – was the thumb hurting then?

Dan is a key cog in the Under 21 machine and was almost guaranteed to be in the starting line against the Australians. At the moment it seems unclear exactly what course of action will be taken but rumour has it that he will travel. It remains to be seen whether an additional player will be taken, in case he is incapable of playing, or whether the Under 21 boys would simply have to survive with three players in that eventuality. Dan mainly plays at number 2 or number 1 so possible replacements could be Joel Sics or Charlie Wright-Roberts. If there is no replacement and Dan cannot play then that leaves Alex Bull, Sam Sics and James Davidson to face the Aussies alone. The Under 21’s coach, Andrew ‘Sven’ Schaefer, is understandably worried by this problem. He said (in a slightly Swedish accent) “Of course this is a problem as we do not have another Dan Duhig but we do have other players”. This is a big blow for the Under 21’s, especially seeing they were already facing a very difficult task as the Australian team is among the best in the world. It is believed Dan will be sleeping in an oxygen tent for the next week in a desperate attempt to heal the thumb before next weekend. 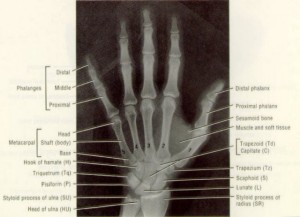 The hand; almost any of these bones could be the problem, we really have no idea! Let’s have a guess at the 1st metacarpal.

Comments - No Responses to “Forget Metatarsels… We’ve Got Bigger Problems!”