It has been four years since Kent Target have held a tournament at their training grounds, Risebridge Farm, but it was well worth the wait!  The club hosted an Exhibition Match for the UK World Cup team against a “Rest of the World” side on Saturday afternoon.  With about three hundred spectators during the weekend and a number of local companies sponsoring the event and enjoying the hospitality tents, the weekend was a real winner for polocrosse.  They even had the added entertainment of local band, The Devil’s Cut Combo, playing a couple of sets on Saturday night backed up up with a DJ putting on great tunes in the new “Party Shed”! 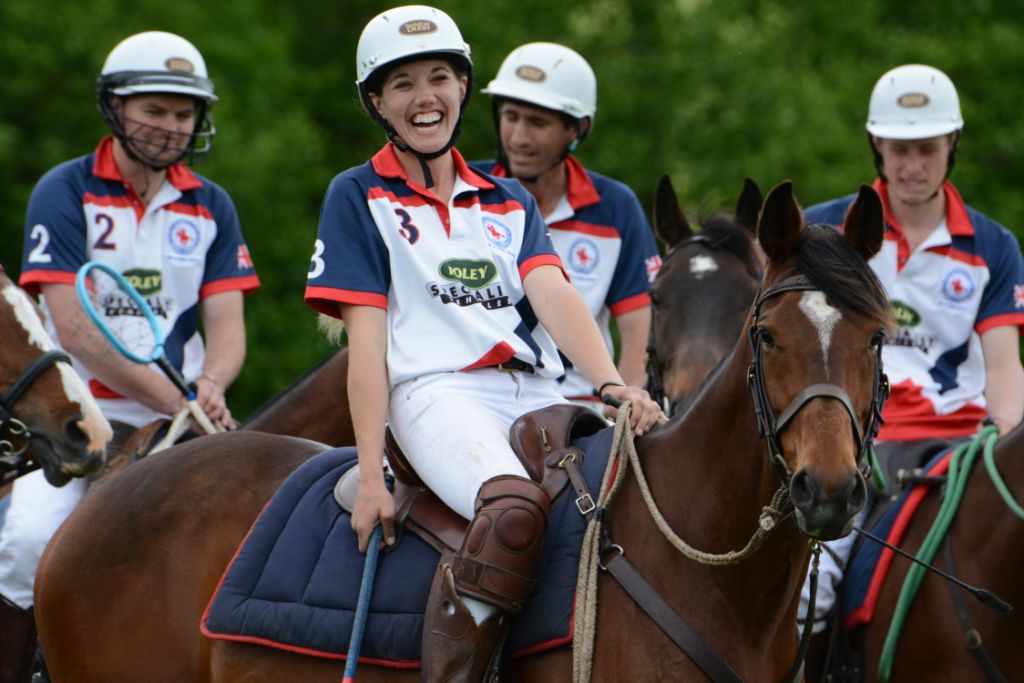 In the match itself, the UK ladies put some quick goals on the board in the first chukka as the three Aussie ladies they were facing in Jana Dillon, Amy Hochuli and Emily Keen took time to find their feet together.  Debbie Harris dominated at the back of the lineout, combining well with Charlotte Pykett up the front.  The first chukka for the men started well for the UK with Jason Webb at No.3 and Danny Duhig at No.2 delivering the ball without incident to Joel Sics to score two quick goals.  However, two minutes into the chukka, Jason felt his horse, Banjo, go sore and Max Pedley was called on to finish the chukka.  It was clear that the Rest of the World’s men’s players of Matt Smith (SA), Will Halcrow (Brazil), Lewis Parr (Wales) and Jono Keen (AUS) were not going to give the UK men an easy ride and at the close of the game they came away level in scores.  However, the UK ladies continued to play an incredibly high standard of polocrosse and the addition of Lauren Williams (Wales) to the Rest of the World team couldn’t slow their scoring, ensuring that the UK team ran out the winners of the match 22-12.  Congratulations to Debbie Harris for winning Most Valuable Player and to Charlotte Pykett’s Colleen for the NFU Mutual Marden Branch Best Playing Pony. 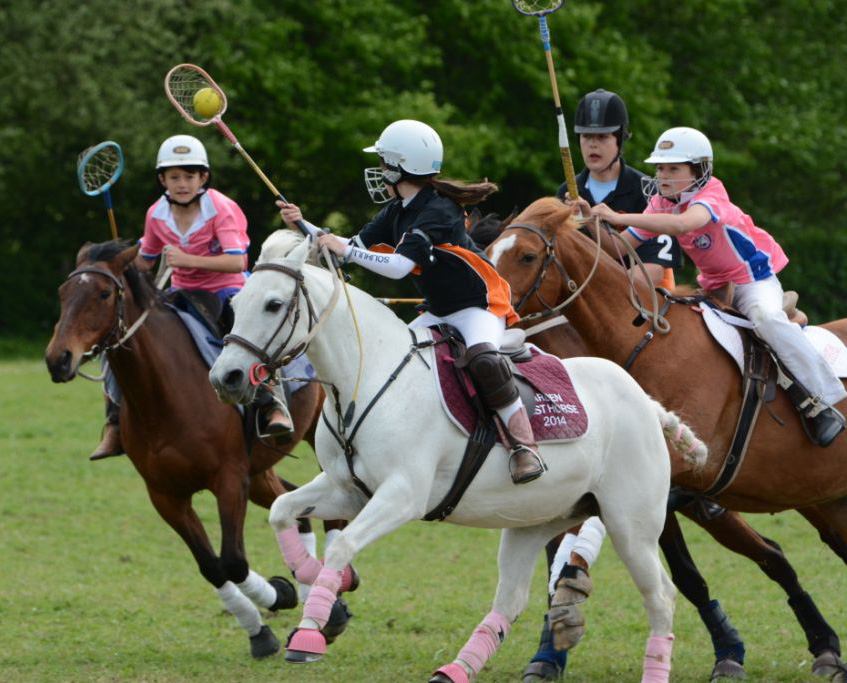 Although entries in the tournament, which was run in sections, were down on what the club expected, all the divisions were very close, resulting in exciting games and hard fought finals.  In the Novice Juniors, eight players rotated between teams and all picked up a prize for brilliant play!  Leila Franzen won Most Valuable Player and Charlie Kish picked up Best Playing Pony with Rocket.   The kids also put on a fantastic demonstration after the Exhibition Match in front of all the spectators and sponsors, who cheered them on with huge enthusiasm!  In the E Grade, Chiltern dominated with Robin Winder picking up Most Valuable Player.  However, the Welsh Dragons didn’t go away empty handed, with Sophia Harpin picking up Best Horse & Rider Combination.  The D grade was closely fought with the final between Cotswold and Kent Kids, with the experience of Cotswold coming out on top.  Most Valuable Player went to Dom White, with Joao Evora picking up Best Playing Pony on the evergreen Tangles and Charlie Hewitt winning Best Horse & Rider Combination.

The C grade was split into a Championship and a Plate competition after the first game and once again, the scores were close in all the games.  In the C Plate, it was an all Kent final, with the Kent Lions beating the Kent Tigers by a goal and Alex Brown picking up Best Playing Pony in that competition.  The final of the C grade was the match of the tournament.  With four of the current UK Junior boys playing against each other and Charlotte Winder and Madi Kish at the respective ages of 17 and 18, it was all about youth and some serious horseflesh with three horses having won top international and national pony awards teaching their young riders the ropes.  In the first chukka, Kent pulled away into a lead with George Parrish picking up some unbelievable ball at the back of the lineout and Jack Brown scoring baseline goals.  However, the second chukka was all about Welsh Dragons as Fin Bristow let his pony run and Laurie Cam dominated in midfield.  Going into the third chukka, the scores were level and as Madi Kish battled in defence in midfield and Charlotte Winder went to the No.3 for the Welsh Dragons on her lovely young horse, it could have gone either way but at the bell the scores said 8-7 in favour of Kent.  Best 1 went to Fin Bristow who also picked up Best Playing Pony for the wonderful L’Oreal Lee, Best 2 went to Madi Kish and Best 3 went to George Parrish.

The Men’s and Ladies competition was again split into a Championship and Plate competition after the first game.  In the Plate, the Men’s division was very hard fought with some fast and furious polocrosse.  Welsh Dragons ran out the eventual winners over Cotswold with Lewis Parr picking up Most Valuable Player and Leroy Jolly winning Best Playing Pony for his horse, Chaos. In the Ladies division, the Kent Ladies were on great form, beating Rugby to the title.  Most Valuable Player went to Rugby’s Amy Hochuli and Best Playing Pony went to the horse with a big fan club, Sharon Kennedy’s Alfie!

The Ladies Championship competition produced great matches with Cotswold facing Kent Dragonesses in the final.  Emily Keen was on great form at the back of the lineout, combining brilliantly with an in-form Rachael Duhig and Suki-Jo Whitehouse doing a great job in midfield.  For the Kent Dragonesses, Debbie Harris played great polocrosse all weekend and worked well with UK teammate Kerry Bean who also pulled the No.1 shirt on for a few chukkas.  With Aussie Jana Dillon showing some great form too, it was very tense until the final whistle when Cotswold ran out the winners, with Emily picking up Most Valuable Player and Rachael winning Best Playing Pony with Lola.

The Men’s Championship was the closest of all the divisions, giving an indication of how competitive the rest of the season is going to be!  On Sunday morning, Kent beat Cotswold by a goal before Cotswold turned the tables on Highlanders, winning in extra time.  This left the competition wide open going into the last game of the weekend between Highlanders and Kent with the added interest of Kent facing their former teammate, Joel Sics!  Highlanders got off to a perfect start leaving the field three goals up.  In the second chukka, Jason Webb moved to the No.1 position on his young horse Sea Breeze, after Banjo had been injured the day before.  The switch worked well with Matt Smith plucking the ball out in the No.2 position and Jason swooping on some loose ball, leaving the scores 6-6 going into the final chukka.  This time, Alex Richardson was on fire gaining a lot of ball at the back of the line out and although Will Halcrow, the Kent No.3, made life hard for Joel Sics in the area, there was no doubting Joel’s determination as he put the goals on the board.  Zimbabwean PP Parham also played his part in the No.2 position for Highlanders to give them a 10-8 victory at full time and ensuring they finished the tournament as winners with Cotswold gaining second place on count back.  Joel Sics deservedly won Most Valuable Player and Best Playing Horse for the wonderful Chispa.

Thank you to the club members and local friends who made this tournament possible including sponsors Plumbline, Ravensrock Groundworks, NFU Mutual Marden, Edmondson Interiors, Marks Scott Arenas, McVeigh Parker, Belsham Farming, Globe & Rainbow Pub, Bob Phillips Consult and to Polocrosse Extreme, Your Horsemanship and Poppinghole Farm for their auction items.  The club has raised a substantial amount of money for the UK World Cup team in addition to introducing polocrosse to a whole new audience.

We’ll leave you with a few comments from spectators and sponsors… “Polocrosse should be an Olympic Sport!”, “what an incredible group of people polocrosse players are; so friendly and passionate about their sport!”, “I definitely need to give this a go!”, “What a great way to spend an afternoon; competitive sport, lovely food and an endless supply of Pimms!” “Please put this back on next year!”

So thank you to everyone who made the trip to Kent, we hope you will be back!