France have claimed their fifth European Challenge in eight years as they overcame Germany in the Final. France hosted the event for the second time, this time in a new venue of small rural riding centre called Les Ecuries Alaskallia in Pas de Calais from July 17th to 20th. Alongside the event representatives from all the European Polocrosse countries, including the United Kingdom and Ireland, met and discussed the future for their sport in Europe and how they should work together going forwards.

The tournament was preceded by two days of training, including a stress management workshop led by two professionals trained in sophrology and emotional management, a natural horsemanship session and it also included a polocrosse strategy workshop and an umpire course and exam led by Barry Amor of the UKPA.

The training was hailed as a big success and attended by all the countries present. The tournament was also very successful and saw the participation for the first time ever of a Finnish team, who were supported by two players from the Dutch national team, which unfortunately could not attend in full force this year. There were over 50 players and horses present on site over the four days of training and tournament. This meant that alongside the main European Challenge, a B and a small PJ tournament were also held.

Most teams were composed of a variety of players of all ages and backgrounds, making it a friendly event which was reinforced by two previous days of mixed friendly chukkas.

The French winning team was mainly composed of young players from all over France, aged between 14 and 22, with two of France’s more experienced players as support. 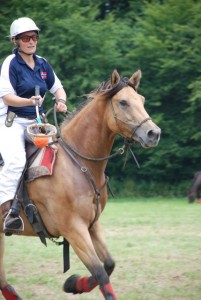 No bridle? No problem for Barbara Beaufilis

Alongside the event a meeting was held to discuss the future of polocrosse in Europe and what the polocrosse playing countries need to do to grow and develop the sport. Executive members from each European Polocrosse Association traveled to France for the meeting and it was acclaimed as highly successful by those present and a useful step in the further development of polocrosse in Europe. Europe currently has three full members of the International Polocrosse Council, the United Kingdom, Ireland and France itself (who became members earlier this year). Holland, Germany and Norway are all currently associate members of the International Polocrosse Council (IPC) but earlier this year did express dissatisfaction with the increase in affiliation fees that the IPC voted through for associate members, who cannot themselves vote on IPC matters.

The next major polocrosse event in mainland Europe is the Dutch Open which takes place on the 16th and 17th of August in Otterlo in the Netherlands.