The clothing company OJPolo have been named as the title sponsor for the UK’s own Polocrosse team in the forthcoming World Cup which is being held at Onley Grounds Equestrian Centre near Rugby in the UK from the 8th to the 17th of July.

OJPolo will produce a unique kit for the UK team as they prepare to try and win the competition for the first time in front of their own supporters, having come second in the last world cup in 2007. OJPolo are based in Bedfordshire and as well as producing their own range of clothing they specialise in producing bespoke polo shirts for teams.

As well as sponsoring the UK own team, OJPolo is also putting some sponsorship towards the event itself and have a stand on site to sell their own clothing and replica UK team shirts.

Steve Whitehouse, the UK team manager, said “It’s great to have OJPolo on board as our team sponsor and producing us a kit which will hopefully help propel our team to glory in the competition.” He then added, “The only thing we might have to do is add “crosse” to their end of their name at some point.”

Kieran Markham, Managing Director of OJPolo, said “It’s great to be the title sponsor for the UK Polocrosse team, they are a brilliant team. We see polocrosse as a sport with really serious growth potential in the UK and as their share the same kit requirements with polo obviously we so are very keen to get involved with it.”

The actual design for the playing shirt has also been released and can been seen in the image below. It does indeed look like a very attractive shirt and far more stylish to the ones normally seen in polocrosse world cup, with the UK’s Union Jack flag replicated on the shirt itself, rather than just in the colour scheme or on the logo.

However, while the shirt may win the fashion parade at the tournament the UK team will have to do more than just look good if they are to win the World Cup in front of their home crowd. They take on Ireland this weekend at the Pennine polocrosse tournament near Doncaster in the UK in the final warm up for both countries before the World Cup starts on the 8th of July and a win there would give them the perfect lift before the competition begins in earnest. 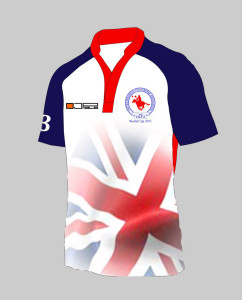