A team of 3 UK ladies, a UK under 21, one former UK under 21 and one Zambian defeated a WA ladies side in an exhibition match under floodlights at the Moonyoonooka Tournament in Western Australia on Saturday the 25th of September. Full report by Jodi Tiver of the Western Australia and Australia ladies team.

(Editor’s note: oh and make sure you go right to the bottom for the best picture we have seen/ made in a while.)

The big tower lights went up, cars and spectators packed out every spare space of sideline and an exciting ‘buzz’ started to rustle up as the International Exhibition Women’s Match between WA and the United Kingdom kicked off at the 2010 Moonyoonooka Tournament on Saturday 25th September!

The match came about when Western Australia heard there was going to be an influx of UK players heading out here to get some more polocrosse under their belts in preparation for the 2011 World Cup Team selections and we wanted to make the most of this opportunity as well as provide something a little extra to the WA membership and our own women’s players.

Teams rode on to the grassy pitch/field (depending which team you were cheering for!) which had been very well prepared by the Moony crew and umpires Laurie Martin and Ryan Murphy (of the USA World Cup squad) gave the players a quick spiel before calling “Time On!”

The UK women had been extremely lucky in the horse department. Charlotte Pykett (UK Ladies’ squad) was on East Lynne Mtumba, Jane Cooper’s top mare she played at the Perth and Ballarat Nationals, Lucy Shell (UK ladies’ squad) was on Springbrook Hightide, loaned by Trish Jones who cleans up numerous awards and has played the last 2 Nationals also on him, Annie Waterer (UK ladies’ squad) was on Chris Dunlop’s Corona, fresh off his Champion A Grade Pony win at Twin Pines the week before and also played at the Ballarat Nationals, Hannah Watkin (former UK Under 21 captain, now living in Western Australia and represented WA in the Under 24 ladies at the Ballarat Nationals 2010) on her own Nationals horse Rossi, Sammy Rowden (UK Under 21) on BJ Thomas’s A Grade horse Little John and Lauren Watson (loaned from the Zambian World Cup Team!!) on Sarah Marriott’s lovely grey mare East Lynne Georgette – they were certainly ‘riding high’!

The first UK section of Charlotte, Lauren and Lucy started with a massive chukka with Lucy Shell doing all the damage at the back of the line up with some pretty handy pickups and good delivery’s to Charlotte while Lauren worked hard in keeping her man. The WA section of Marijke Grorud, Pip Crook and Sarah Marriott didn’t see much of the ball until half way through when they pegged a couple back. The 2nd sections of Annie Waterer, Sammy Rowden and Hannah Watkin went up against the experience of Tamala Bailey, Kate Ryan and Vanessa Freeman in what was a pretty tight battle for the entire game. Both sections banged a couple of goals on the board with the UK retaining a slight lead.

The 3rd chukka was a little tighter but the UK girls kept their intensity up and remained the dominant chukka with Marijke starting to find her form at the front for WA. In the 4th Hannah was getting to the ball first but not quite making the pickups so the WA girls inched back into the game slowly but surely. Charlotte, Lauren and Lucy needed another big chukka to keep the UK in the lead and they put together another very strong performance after WA had made a change with Pip Crook going to the 3 and grabbing the first couple of balls. Going in to the last the UK girls were up by 4 but the WA girls had really started to put the foot down in this section!! Annie was quick to grab a couple of hard get balls at the front of the line up and banged them through the posts but WA was having none of that and threw a few more to close the gap!! There was a bit of a bungle when Annie’s racquet was stood on and lost under the lights and with only Sammy Rowden in the line up in the 2 spot she snagged the ball and then was looking to get it out to Hannah who was trying to pass her racquet to Annie so she could throw the goal!! But the UK had done enough in the other 5 chukkas to give them a 3 goal win 17-14 over the hard fighting WA girls.

The match showed that a big first chukka was crucial to the end result as the WA girls spent the rest of the game trying to close the gap and playing catch up polocrosse. The UK girls rode their loaned horses brilliantly and really did some damage being able to get to the ball first and fighting hard for a game they were incredibly determined to win. Coach Adrian Tiver was extremely impressed with the way all the girls dug deep and kept their heads up and attitudes positive. WA Coach Trish Jones was pleased the WA girls put up the fight they did throughout the game and I know all 6 are desperately keen for a rematch!

It was a fantastic display of Women’s polocrosse and all 12 players are to be congratulated for the way they conducted themselves and played. It was an incredibly difficult decision for our judges to select the best UK Horse and Rider Combination as both Charlotte on Mtumba and Lucy on Hightide had been on super form all game but in the end it was Charlotte and Mtumba that were awarded the prize with the WA Horse and Rider Combination going to Tamala Bailey and Boronia Heidi who had been on some blistering form throughout the game.

A huge thanks to the Moonyoonooka Club for organising the lights and agreeing to run the match, it was a fabulous sight and I am sure will be one of the biggest highlights of the 2010 year!

(Editor’s note: We believe there was a reserve member of the UK side in Will “mer” Halcrow. Luckily he/she wasn’t called into action. Report that a large meerkat known as “Simples” Simon Amor was on standby for the team as well are unconfirmed but we thought we would mock up a picture of how they might have looked anyway.) 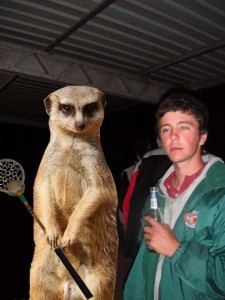