The third day of the Nutragrow Australian National Championships at Ballarat started with the official breakfast but once everyone had eaten their fill the play started with Victoria trying to finally get their first win of the championship with their Junior Open side taking on Western Australia. The WA side is unusual amongst the Junior Open side as it is mainly made up of girls, in fact it only has one boy in it, James Lester, compared with the other sides which normally have only 1 or 2 girls. However early on they matched the Victoria boys but then good play from Victoria started to create them a lead (or it is possible that WA got put off by the new water feature that suddenly appeared at the side of the pitch when the tap got broken off a water pipe). WA continued to win ball but the Victoria boys, no doubt stinging from their defeat to the Northern Territory yesterday, put them under constant pressure with some good play in particular from Tom Ford in one of the number 2 spots and Lachlan Avis in as one of the number 3s. This meant WA didn’t take all their chances and in the last chukka Victoria added more goals to win by 14 goals to 6. 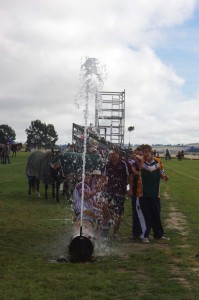 So that got Victoria off to a good start in the day and in the next round of matches it looked like they might carry on winning as their Junior Mixed team also took on WA and their Under 24 Women took on New South Wales. However, both ultimately ended in defeat. The Juniors lead 8-7 at the end of the 5th after a strong performance by the Victorian girls but then the WA boys came out and put their opponents to the sword to win 13-9. The Under 24 women battled throughout and lead 2-1 at the start. It was 9 all early on in the fourth but then NSW found another gear and pulled away to win 20-11.

These two defeats seemed to restart the trend of heartbreaks for Victoria and 4 more times in the day they suffered. By far the most shattering was the defeat to WA in the Senior Mixed which they lost in over time, 15-14. Early on Victoria led and pulled themselves out to an 8-5 lead. Then the WA men section got the better of their Victorian counterparts in chukka 4, with particularly good play from Chris Dunlop at number 3 and Adrian Tiver at number 1 (for fans of UK polocrosse it was great to see Chris Dunlop go up against his former Kent Target team mate Islay Young who was in the number 2 spot for Victoria. Chris got the better of their skirmishes, particularly when he took a free goal off Islay for a wild backwards swing). However, the Victorian girls came back out and again gave their team the lead and WA were 10-12 down at the start of the final chukka. Adrian Tiver came out on fire and quickly levelled it up and then added two more for good measure. WA fans thought from here they were possibly safe but Victoria battled back again with 2 quick goals from Willy Radford to level it up. Before the men could conclude the match the hooter sounded and the game was going into overtime. The Victoria fans must have been feeling the more optimistic, their girls had outscored WA throughout the match. However, when the ball came out the back it was Sarah Marriot aboard the legendary horse Plucker who swooped on to it, carried it down the field, passed it to her number 1 in Alana Clohessy who finished off the job and threw Victoria back into despair. This was their Senior mixed team second 1 goal defeat in 2 days and they must be wondering how they can get a victory. 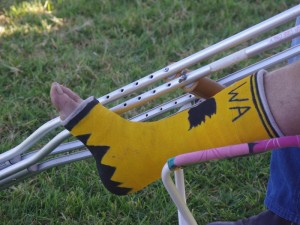 WA Fans – clearly the most dedicated.

The Victorian Senior Women team took on WA in their opening match and they got off to the good start but then the talent of players such as Jane Cooper and Jodi Tiver for WA started to tell and they built themselves a lead. Victoria stayed in touch but in the final chukka WA moved Jane Cooper up to number 1 from numkber 3 and she scored a number of quick goals to pull it out to a 18-12 victory.

The Victoria Senior Men team also got their campaign underway today, they took on the considerable might of NSW and right from the start it was clear they had a tough job. The Anderson brothers, Lance and Chris, and Will Weston were on top form in the first few chukkas and by the end of the third Victoria were down by about 10 goals. However, then Victoria started to get more grip of the game and they fought right till the end. A strong final chukka from Michael Semmens at 3 and Hughie Radford at 1 made the final score 21-16 to NSW.

Finally, for Victoria their Masters Mixed team took on South Australia. Both these teams had yet to record a win in the Masters Mixed division and so were keen to end on a good note. Victoria again started brightly and at the end of the 4th chukka they looked the favourites to win leading 10-8. However, back came SA and eroded their lead and then built one of their own to finally win 15-12.

In the other Masters Mixed game of the day NSW took on Queensland. It seemed likely before hand that both teams would make the final unless Queensland suffered a very heavy defeat and lost out to SA or Victoria on goal difference. NSW dominated the opening few chukkas and lead fairly comfortably, however then late on Queensland came back into the match and actually ended up losing by just 2 goals, 18-16. This result meant the two teams finished in first and second spot in the group stages and will face each other again tomorrow in the final. Queensland will hope that they can turn the tables on NSW and emerge as champions.

The Masters Mixed game was the first of 4 clashes between NSW and Queensland during the day. The other 3 matches all ended in the same result; a NSW victory. The two sides met in the opening match of the Senior Women competition and though Queensland got off to a perfect 3 nil start through good link up play between Stephanie Thorsby and Aimee Mcquire NSW soon clawed them back and from then on out scored them to win 21-12.

The two sides next faced each other in the Senior Mixed. The teams were different (and slightly younger) but the result was very similar, a 19-11 win for NSW.

Finally they clashed in the Masters Men and it was NSW who emerged as comfortable winners, 26-12, to book their place in the final tomorrow against WA who had beaten Victoria 16-10 earlier in the day. WA and NSW faced each other on day 1 of the competition in the group stages and it was NSW who emerged victorious on that occasion. It was narrow victory though so the final tomorrow should be fascinating.

NSW also won their other 2 matches of the day to end day 3 still undefeated. They convincingly beat SA in the Junior Mixed, 25-1 and in the Junior Open they beat Northern Territory 19-15. Northern Territory started well, buoyed by their good win over Victoria the previous day, but then in the third chukka NSW started to pull away and the Territory could never quite close up the gap.

Northern Territory suffered a disappointing day all round with their Senior Men losing 33-8 to Queensland, who were probably determined to win after losing to WA yesterday, and their Under 21 Mixed side also lost to Queensland 13-11.

Queensland, however, could not produce the same result in their opening Under 24 Women match with WA. They started well but then good play from the WA number 1’s Lauren Cant and Tahlia Guy produced them a lead which they consolidated in the last chukka to win 15-12.

It was a good day for South Australia, as well as winning their game in the Masters Mixed they also managed to defeat Tasmania 13-10 in the Under 21 Mixed. Early on it looked like it might be by more but Tasmania (particularly the boys section) fought back hard and it looked like they might even have a chance of snatching the game away from SA going into the last chukka but SA scored a couple of good goals and held on to record their second win of the day.

Tomorrow sees yet more round robin matches as teams fight for the top two spots in order to play in the grade finals. Also it sees the first 2 finals, the Masters Men and Masters Mixed. With NSW in both and in dominant form it could be that the first two trophies are destined to land in light blue arms.

Comments - No Responses to “Day 3 from the Australian National Championships”