Within the last day we have been lucky enough to receive further news from the Highlanders Chairman Guy Robertson as he reveals more of his cunning plans to retain the A grade National Championship crown.

Firstly, Brian Davidge will be riding a horse named ‘Bullet Lee’ which (guessing by the name) is from the Lee bloodline. This makes it a top bred horse and certainly a useful addition to the Highlanders already distinguished line up of horsepower. It also makes it a relative to the horse that you can win in Shaye’s raffle.

Secondly, he has confirmed that the ‘Becks’ in question is indeed Edward Beckerlegge and he will be fulfilling a very special role when playing for the Highlanders. Not only will Ed have to control a horse, a stick and a ball at high speed, he is also being given the special duty of distracting female opposition players. According to Guy, he is thriving in this role and since his return has been receiving unprecedented levels of attention, particularly from Sophie Lodder. If this is true then Arden could have real problems as surely Sophie won’t play her best if she can’t take her eyes of Edward? 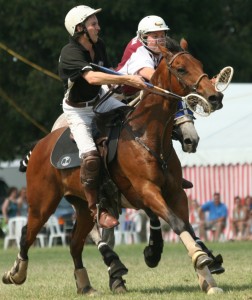 Never mind the ladies, it would seem even Jono wants to be close to Ed!

Comments - No Responses to “High Jinks!”