Australia and New Zealand have booked their places in the Quadrangular Final down in Turangi, ruthlessly putting the Irish Cavaliers and Zambian Barbarians to the sword respectively. Australia took on the Cavaliers first and lead from the start. They had made it 17-4 by the end of the third chukka and continued in a similar vein to end the match winners by 39 goals to 9. The Cavaliers fought to the end but the young Irish players could not live with the far more experienced Australia side who seem very determined to sweep all before them in this tournament.

With the Cavaliers losing, New Zealand knew a win would guarantee them a spot in the final. They did go 1-0 down initially but soon levelled it up and from then on it was New Zealand’s game. The hosts ended up winning by 31 goals to 8, despite the best efforts of the Barbarians, and therefore the final will see New Zealand take on their oldest and closest rivals Australia in the final tomorrow.

And the potential outcome of the final? When the teams met in the group stages it was Australia who emerged victorious but New Zealand will have learnt from that and will be looking to overturn that result in the Final. Whether they will be able to do it against an Australian team that has looked dominant in this tournament so far remains to be seen but the home crowd will be willing them on to success. 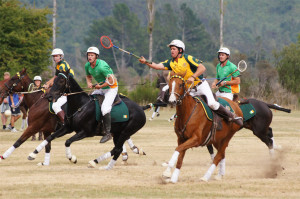 Rob Sibley scores a goal for Australia as they overcome the Irish Cavaliers to make the Final of the Quadrangular.