Ahhh the National Finals 2005, what a great time was had by all! Let’s look back at it and remember it in all its glorious detail (well the bits I can remember at least)

The result went with the smart money as Highlanders defeated Arden in a thrilling final. It was a lot closer than some predicted and probably the Highlanders wanted, especially as Arden led early on and were supported by the majority of the crowd who were keen to see an underdog victory.It was fair that Arden picked up more prizes for best numbers as individually they were better. Their youngsters in Alex Bull, Jono Keen and Sophie Lodder were truly magnificent though so was James Robertson for Highlanders who, as it is so easy to forget as he seems to have been in A grade for ages, is only 20. The Zimbabwean flair of Jason Burbidge, Greg Sargeant and Hamish Michael also helped Arden a great deal, but in the end it was not enough as the Highlanders played wonderfully as a team and targeted the Arden weaknesses brilliantly. They deserved their victory but at least this year it was a brilliant final, unlike the thrashing Pennine handed out to Kent in 2004. 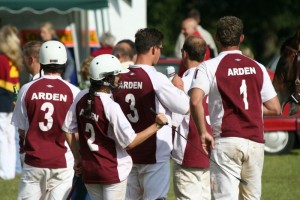 Despite the attempts of Sophie Lodder to motivate them, the Arden boys couldn’t quite upset the Highlanders

Arden beat Pegasus Croome in a hard fought and exciting final. Both teams had won their respective groups fairly easily and were rightfully in the final. Also both teams played well throughout the match and it was a close contest but Arden eventually won out and were crowned B Grade Champions 2005. There were particularly good performances from Dan Duhig and Suzanne Sargeant.

The Welsh Dragons defeated Kent in a final which will probably be best remembered for Bob Sherwood getting wrongly sent off rather than any particularly brilliant play. The umpires had cautioned his team mate Mike Turner for a hit to the head of an opponent early on but later when Bob committed the same offence he was sent off for two hits to the heads of opponents, even though he had only actually done one. The problem was that the table had written it down that he, not Mike Turner, had performed the first hit, even though the umpires admitted this was wrong. The Welsh Dragons supporters insisted that as it was written down he had to go and go he did, though not until there had been a lengthy argument. Frankly it did seem slightly ridiculous and slightly unsporting of the Dragons, who were winning anyway. Putting the wrongful sending off aside the Dragons played well and Charlotte Pykett and Lewis Parr both scored freely. They were the rightful champions but the manner in which it was achieved must have left a sour taste in Kent’s mouths. 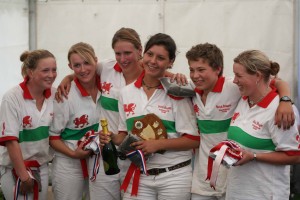 Arden emerged victorious in the D grade which was played as a round robin. Kent ended up as runners up as both teams defeated Western Phoenix and Liscombe/Pennine but when they faced each other Arden won by the narrowest of margins, 12 goals to 11.

Centaur juniors played their hardest but for the second year in the row they ended up as runners up. Pegasus Croome were the better side, both on paper and on the field, but that didn’t stop Centaur trying their upmost to cause an upset. In terms of goals it wasn’t that close but in terms of possession it was lot closer. Centaur couldn’t finish as clinically as Croome, who were helped by the considerable goal scoring ability of Ben Taylor, but they battled just as hard and played well as a team especially in defence. Most of the juniors in this final still have at least another year before they are too old so it bodes well for the junior grade this year. 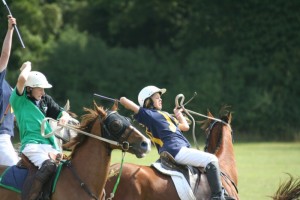 There were only two teams in the PJ’s last year and Centaur beat Silver Ley, hopefully there will be more entries this year.